A shift happened in my life when I left my abusive husband. I finally saw my borderline OCD for what it truly was.  An all-consuming attempt to cover up the real lack of control I had been living with for so long in my marriage. My desire to keep things looking “together” for everyone else was a failure. I was a fraud and one hell of an actress.

I left and let as much of it go as I possibly could; I let go of the husband, the career, the abuse, the money, the fancy car, the clothes, my home, and my friends. I left it all behind, and with it I left my need to control. My attempt to create the facade of “normal” just kept me bound to the abuse. If I had exposed the truth of my situation I felt like I would look a failure for not succeeding in my relationship. In trying so hard to win I lost.

I have been searching for clarity ever since my divorce years ago. If asked what I am looking for in my life, I respond with one word, clarity.  Unfortunately, most days I live with what I refer to as brain fog. My thoughts are disjointed and so very far from the woman who had once run an empire in a busy city. I couldn’t figure out how I could have gone from being so hyper-aware and organized to this. I decided that I would passively seek for clarity. I had no idea what end was up, but I just knew if I stopped trying to force everything, it would present itself to me at the right time.

I didn’t know how to seek clarity. I thought if I read books, took classes, and sought guidance that I would finally come into it in my own time. I found myself always looking for some sort of clear channel that would tell me what the hell to do. It never came, and so I waited and attempted to sit with the unknown. Moving forward on my foggy journey was hard because I had no idea where I was going. I wasn’t able to look at the big picture. Starting over is hard, especially when you have a lot of baggage to unpack.  I was on the one step at a time plan, and it was here that I learned to rely on my faith.

It took me many years to see that I wasn’t gaining clarity, but learning patience. I finally understood clarity when I stopped looking for it, and decided to be it. If I had taken time to focus on my inner self rather than just keeping busy (in a lame attempt to hide the fact that I had no idea where I was going) I may have realized sooner that it was futile. You can only become clear when you are able to sit and just be. No journey. No seeking. No controlling. Just me, myself, and I, sitting very quietly and listening. 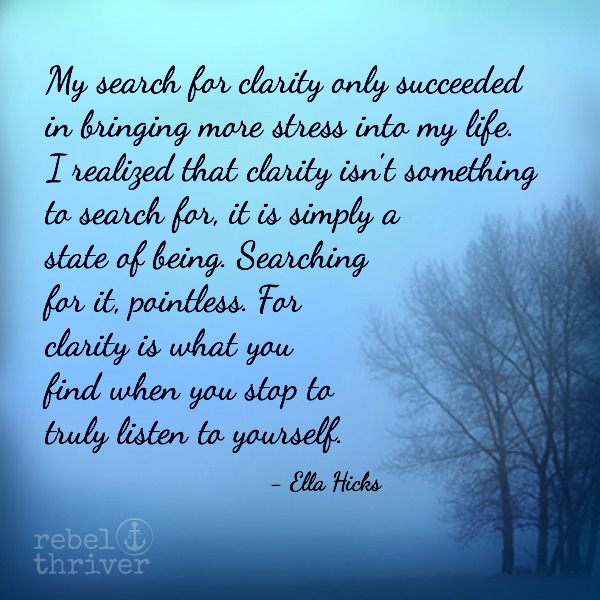 14 thoughts on “The Clarity in Being.”

This site uses Akismet to reduce spam. Learn how your comment data is processed.

I am a girl named Courage 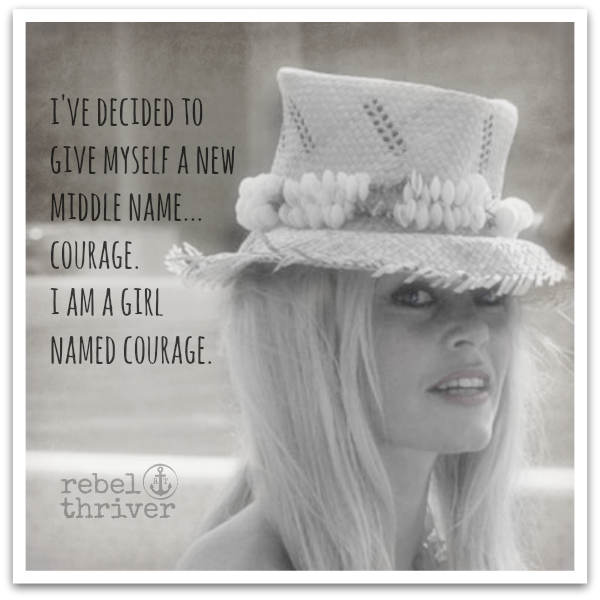 My mission in life is merely not to survive, but to thrive; and to do so with some passion, some compassion, some humor, and some style.
-Maya Angelou ♥

“I began to shiver. There was a wind blowing through me; I felt like an empty room with all the windows shattered, terror blowing through me, no comfort left. That was how I felt consciously and distinctly.” – Frederic Prokosch This is how domestic violence feels at times. It guts you and leaves you feeling […]

The days are coming at us faster and harder. And I am not here to give answers. I am attempting to let others know that this is how things are right now. This is a window into our youth at the moment, and the world needs to be aware of it. There are children growing up all around the world in much more dire situations than my own. Where war is the norm what does the future look like?

This incredible man showed me that my heart will never stop expanding. And so on this anniversary of his death my heart breaks open a little wider and my love grows a little brighter. This is my tribute to him. This is my love song.